Dykes on Bikes & Gay Motorcycle Clubs in the U.S. The advent of gay motorcycle clubs in the last half of the 20th century was grew out of a need for freedom, safe haven, and above all, pride. Unlike gay bars, LGBTQ motorcycle organizations could more easily evade police raids and chronic harassment from locals. Joining a gay biker club provided support, safety, camaraderie and freedom to a group of people who struggled to find those things in an anti-gay society. True to its name, Dykes on Bikes (DOB) is a motorcycle club comprised of gay, bisexual, and transgender women that supports the larger LGBTQ community through riding events and fundraisers.

This is a closer look at how a small group of gay women motorcyclists planted the roots of one of the largest and most widely known gay motorcycle clubs in the world, and how current Dykes on Bikes members continue that legacy in 2020.

Dykes on Bikes Emerges from the First Pride Parade

The beginnings of Dykes on Bikes are found at San Francisco’s first Pride Parade in 1976. A couple dozen gay women motorcycle riders had joined together at the start of the parade, and one person in the group made a comment about “dykes on bikes.” It stuck after a San Francisco Chronicle reporter wrote about it in a later story.

For about a decade, Dykes on Bikes comprised of a casual gathering of lesbian motorcyclists coming together at the start of the SF pride parade every year. But through this organic tradition, the motorcycle club began to grow in size.

In the mid-1980s, the club grew to such a number in San Francisco that they began to organize and structure, forming the Dykes on Bikes Women’s Motorcycle Contingent (DOBWMC). The first official meeting was held at beloved lesbian bar named Amelia’s in San Francisco. Eventually, the club’s meeting place was changed to The Eagle Tavern after Amelia’s closed down.

Dykes on Bikes Fight to Trademark Their Name

The term “dyke” is often used as a derogatory term against women who love women (wlw), but the idea behind using the name Dykes on Bikes is a simple one: reclaim ownership of the word as a source of pride, not shame.

In 2004, Dykes on Bikes attempted to trademark their name, but the U.S. Patent and Trademark Office (PTO) refused to approve it, concluding that dyke was “disparaging” to the LGBT community. In their decision, the PTO cited the Lanham Act, which says any name that “consists of or comprises immoral, deceptive, or scandalous matter” or that which “may disparage” others is subject to rejection.

In a 2005 interview with the San Francisco Chronicle, founding member Soni Wolf defended the use of dykes in the club’s name: “That word has been used for years to tear us down. And we said, ‘OK, we’re going to take it back.’” Wolf was in that original group of riders at the 1976 parade, and remained a lifelong member of DOB for decades to come.

Dykes on Bikes continued fighting for the right to trademark their name, engaging in court battles for two years. The name was finally approved by the PTO in November 2006. Dykes on Bikes had brought their case all the way to the U.S. Supreme Court, which deferred to a lower court’s decision that approved the name.

More stories: The Legend Of Sadie The Goat in 1860s New York City 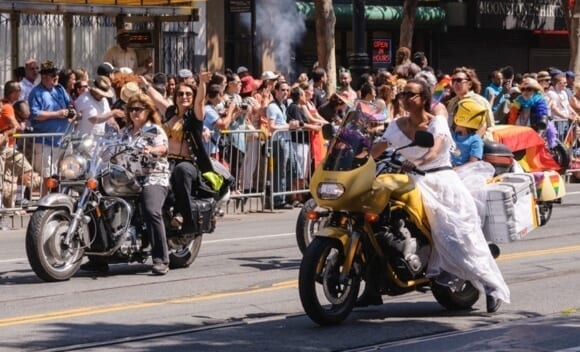 Members of Dykes on Bikes riding motorcycles at the start of San Francisco’s 2013 Pride Parade. (Source)

However, DOB’s victory was short-lived when a male lawyer sued them over the name one year later. Michael McDermott sued Dykes on Bikes in 2007, calling it “disparaging to men.” The gay women’s motorcycle club then went back to court, headed up by San Francisco lawyer and longtime club ally Brooke Oliver. During proceedings, McDermott argued that men were subject to civil rights violations during the annual Dyke March, and further suggested that dyke is associated with a “deep obsessive hatred of men and the male gender.”

In July 2007, the U.S. Court of Appeals for the Federal Circuit tossed out McDermott’s suit, saying he, as a man, had no legal basis for being offended by the term “dyke.” 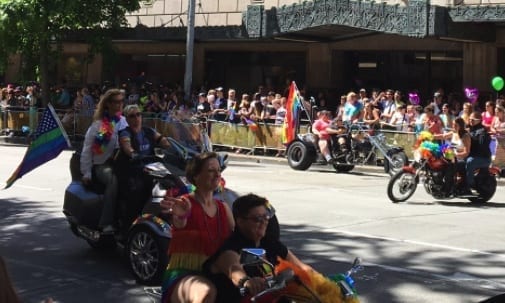 For nearly a decade after this last legal fight, Dykes on Bikes was free to use their name without trouble. But when they tried to trademark the organization’s logo of a triangle and the name on it in 2016, the PTO rejected them again. So, Dykes on Bikes went back to court, headed up once again by lawyer Brooke Oliver.

The organization filed an amicus brief in the ongoing Matal v. Tam case, as the plaintiff was fighting a nearly identical fight in court. An Asian-American band called The Slants sued the PTO for rejecting their name on the basis of the Lanham Act, for which it relied on the same disparaging provision it used to reject Dykes on Bikes.

In arguing for the use of the club’s name, Oliver said, “Our argument on freedom of expression is very much like that of The Slants. The USPTO should not be deciding what is derogatory and what is not, and them doing so is the essence of viewpoint expression.”

During Pride month in June 2017, the U.S. Supreme Court unanimously ruled in favor of The Slants and Dykes on Bikes, declaring the Lanham Act unconstitutional. After fighting off and on for over 10 years to legally retake the term dyke and embrace it as a term of pride, DOB was finally afforded the ability to use their name and logo as freely as any other organization.

As stated above, Soni Wolf was one of the people riding her motorcycle in that original group of lesbian motorcyclists at the first San Francisco Pride Parade. She became a founding member and secretary emeritus of Dykes on Bikes for nearly 40 years. 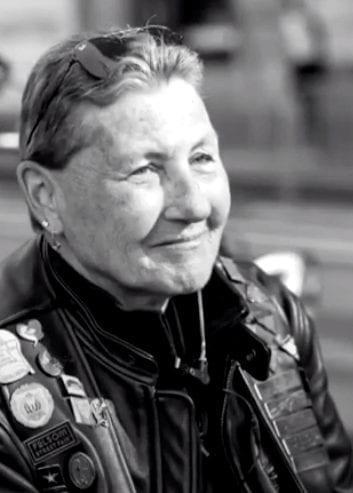 Wolf had served during the Vietnam War as an Air Force medic and moved to San Francisco after finishing her service. According to Oliver, Wolf never talked about her time in the Air Force because “the treatment of the vets coming back from war had been so traumatic for her.”

As Dykes on Bikes grew in number, Wolf helped transform the club into a non-profit organization and was a key part in organizing many rides and events. She was also hugely influential in growing the club’s reach beyond San Francisco, across the U.S., and even around the world.

She sometimes spoke about the pride she felt riding her motorcycle with other gay women during those dozens of pride parades: “To ride down Market Street with all those people looking and applauding and sharing and riding with other women on motorcycles has got to be one of the highlights of my life.” In 2016, Soni Wolf was officially recognized as a Saint by the Sisters of Perpetual Indulgence.

In a sign of deep adoration, Wolf was selected as the Community Grand Marshall in San Francisco’s 2018 Pride Parade. Sadly, Wolf passed away just a couple months before the parade from complications of pulmonary disease and pneumonia. She was 69 years old. During the parade in June, Dykes on Bikes represented her by bringing her bike’s painted gas tank she had during the first parade in 1976. It was placed in a convertible at the front of the procession.

In a tribute to Wolf, Dykes on Bikes said, “The iconic imagery, words, and legacy of Dykes on Bikes would not be what they are today without Soni Wolf.”

In 2019, she was honored by the LGBT Fallen Heroes Fund for her service. Her memorial fund on GoFundMe is still open and accepting donations to “support the archiving of materials with historical significance to the Dykes on Bikes and larger LGBTQ communities.”

More stories: Rigged Elections: A Study of Trump’s Attacks on Elections When He Dislikes the Results

Today, this gay women’s motorcycle club is officially called the San Francisco Dykes on Bikes Women’s Motorcycle Contingent (SFDOBWMC). Though they canceled their rides due to COVID-19, Dykes on Bikes remains very active in 2020. The club’s president, Kate Brown, wrote in late June about their riding event in support of Black Lives Matter. They organized about 200 motorcyclists from the greater Bay Area on an 8 hour, 45 mile ride.

Dykes on Bikes also continued supporting the Pink Triangle Project, a 25-year-long tradition of lighting an LED-lit triangle composed of 2,700 nodes at Twin Peaks park. Despite pandemic restrictions, enough money was raised for the project and the triangle remained lit from June 27 to July 10.

The significance of the pink triangle is a heavy one: Beginning in the 1930s, German Nazis used the symbol of upside down pink triangle to identify gays in concentration camps. But during the AIDS crisis in the 1980s, gay activists from ACT UP retook the symbol, flipped the triangle and created iconic posters that contained the words “Silence=Death.”

Though Dykes on Bikes began as a mostly lesbian motorcycle club, it has grown to encompass bisexual and transgender women, as well as those who identify as non-binary. Dykes on Bikes currently has 9 chapters in the U.S. and throughout the world, including Australia and England. They register and organize about 400 bikes for the San Francisco Pride Parade every year. Dykes on Bikes meetings are open to anyone interested, through they now meet in a virtual space.

DOB began as a safe haven for lesbian motorcyclists to be themselves and share that pride with others in a sisterhood of sorts. Today, it has become one of the largest and most widely recognized motorcycle clubs for queer women in the world. Their work continues to support the greater LGBTQ community in San Francisco and around the country. Check out the San Francisco chapter of Dykes on Bikes on Twitter or Instagram.