Why Is Bisexuality an Invisible Majority in the LGBTQ Community?

Illustration of a raised fist in bisexual pride colors created by Shari Rose.

Bisexual people account for over half of the LGBTQ+ population in the U.S., but only a fraction serve at the country’s largest LGBTQ+ organizations

According to a 2022 national survey conducted by Gallup, more than half (57%) of LGBTQ+ Americans identify as bisexual. Despite representing a majority of the LGBTQ+ community, bi people are severely underrepresented in this country’s largest queer organizations and foundations. Furthermore, bisexual Americans face far higher rates of sexual assault, domestic violence, poverty, and homelessness than gay men and lesbians. Bi people are the invisible majority, and it’s far past time that major LGBTQ+ organizations work to help those who need it most.

Of the 29 LGBTQ+ organizations that reported the sexual orientations of their board members, bisexual representation among these decision-makers is even more abysmal. MAP found that of the board members:

Only 2% of board members at the nation’s largest LGBTQ organizations identify as bisexual. (Source)

How is it that the largest population in the queer community has the smallest amount of representation among the most powerful LGBTQ+ organizations in the U.S.? More than half (57%) of LGBTQ+ Americans identify as bisexual, so why does representation within these foundations fail to address the bi community?

Lack of Funding For Bisexual Organizations

The marginalization of bisexual Americans doesn’t end with lack of representation at LGBTQ+ groups and foundations. The failure of adequate funding for bisexual-focused organizations is also at the heart of the issue.

The 2019-2020 Resource Tracking Report, compiled by Funders For LGBTQ Issues, tracks financial donations and grants that LGBTQ+ organizations receive from other foundations, corporations, and funding institutions throughout the U.S. It counted domestic grant dollars received by each sexual orientation or gender identity in the LGBTQ+ community and found that in 2020 alone:

Unfortunately, it’s a widely held belief in the LGBTQ+ community that bi people are “straight-passing,” and simply do not need the same support that gay men, lesbians, and transgender people need. But the opposite could not be more true. Bisexual women and men have the highest rates of sexual assault and domestic violence, are more likely to be homeless than their gay counterparts, and face higher rates of mental health disorders.

Sexual Assault and Domestic Violence in the Bi Community

The only other group in the community who faces similarly horrific statistics regarding sexual violence are transgender people, where an estimated 47% of all transgender people, regardless of sexual orientation, have been raped at some point in their lifetimes.

Furthermore, the study found that 37% of bisexual men have experienced rape, physical violence, and/or stalking by an intimate partner at least once in their lifetimes. This number is higher than the other two groups included in this survey, gay men (26%) and heterosexual men (29%).

Screenshot of a Bi Pride event in West Hollywood that took place in September 2018. (Source)

These statistics are horrific for all groups examined above, and sexual assault prevention should remain an important focus for LGBTQ+ organizations. But to have the bisexual population so disproportionately affected by such heinous crimes, and so little funding available to specifically support bi victims of rape and sexual violence is a tragedy all its own.

Even though bisexuals comprise the largest identity in the LGBTQ+ community, the group is greatly underrepresented in academic research regarding mental health and mood disorders. However, research that does exist shows that bisexual men and women are more likely to experience mood and anxiety disorders at higher rates than gay and straight people.

According to a 2020 report from the American Psychiatric Association, lifetime rates of mood disorders like depression affect:

The report also found that bi men are affected by mood and anxiety rates at slightly lower rates than gay men:

Most seriously, however, are the rates of suicidal ideation in the bisexual community. The report found that 45% of bi women and 34% of bi men reported thoughts of suicide in the past year, compared with 29% of lesbians and 25% of gay men.

Similar to the numbers involving sexual violence, a 2019 UCLA study that examined poverty rates in the LGBTQ+ community found that bisexual women and transgender people have the highest rates of poverty in the U.S., tied at 29.4%. Bi men experience the second-highest rate of poverty at 19.4%. 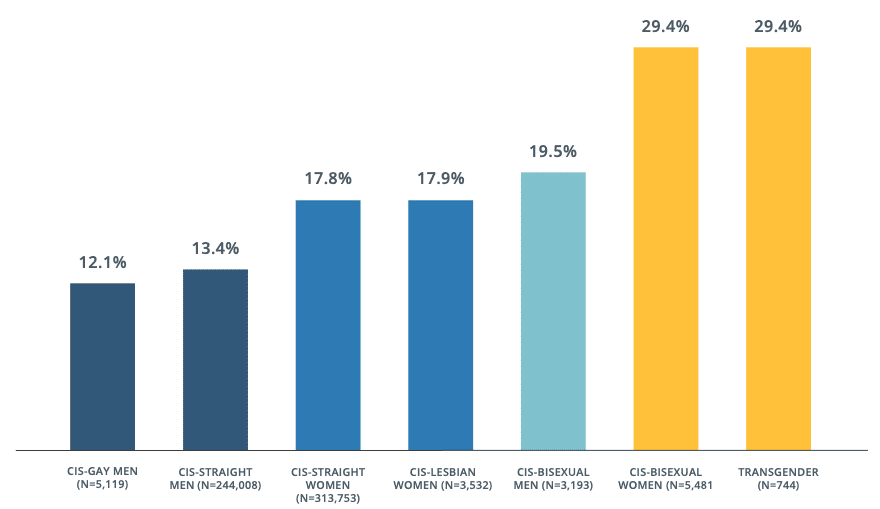 Bisexual women and transgender people have the highest rates of poverty at 29.4% each. (Source)

Biphobia and Monosexism in the LGBTQ Community

Why does the bisexual community face higher rates of sexual assault, domestic violence, mood disorders, poverty, and homelessness than gay men and lesbians? Though there is far less research conducted on the bi population than their gay counterparts, researchers point to the prevalence of biphobia in both straight and gay communities, bisexual erasure and monosexism, and minority stress.

Because both gay and straight people benefit from monosexism, the idea that a person can only be gay or straight, the bisexual identity is rendered impossible by these standards. Within this reductive frame of thinking, the sexual orientation of a bi person is determined by the gender of their current partner. They can only be gay or straight, there is no possibility of attraction to multiple genders. But that’s not how bisexuality works. The bi identity disrupts the fixed categorization of sexual identity among straight and gay people by suggesting there are other options. And that perhaps monosexuality is not actually the norm at all.

To combat the threat that bisexuality poses to these fixed categories of human sexual behavior, bisexual erasure is a major component of biphobia. Erasure seeks to re-label, ignore, or vilify the bi identity. Those engaging in bi erasure will argue that a bisexual person is simply indecisive, that they’re “really” gay, or that bisexuality doesn’t actually exist at all.

This discrimination creates stigma around the bi identity and contributes to negative mental health outcomes for bisexual people. The statistics shared in this piece help quantify the negative effects that daily biphobia, bi-erasure, and monosexism have on the largest population in the LGBTQ+ community.

I’m not saying that all gay men, lesbians, and straight people harbor biphobic beliefs. It is certainly true that many gay and straight people are incredibly accepting of the bi friends, family, and acquaintances in their lives. But biphobia, particularly in the LGBTQ+ community, is a well-documented phenomenon, and I know every bi person reading this knows exactly what biphobia looks like, and can point to specific biphobic circumstances they’ve experienced in their lives. I can certainly name a few from the past couple years.

Something must change. LGBTQ+ organizations must step up and recognize that they are failing to serve a large swath of the queer community when they lump bisexuals in with gay men and lesbians. These statistics show that the B in LGBT requires different forms of outreach and support, and that bisexual-focused groups need so much more financial support than that paltry $60k in 2020.

Please consider donating to the American Institute of Bisexuality, a 501(c)3 organization that works to support the bisexual community across the country.