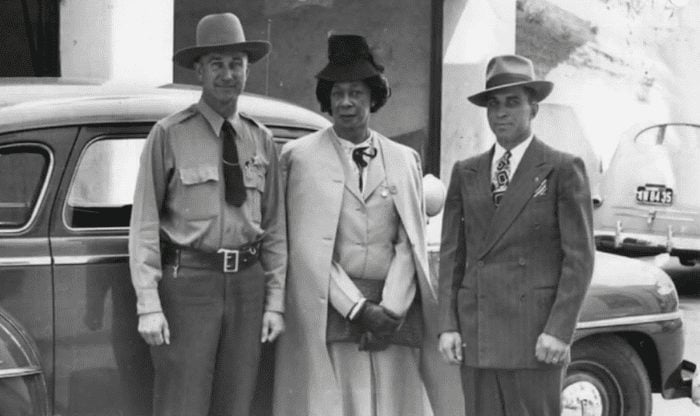 Lucy Hicks Anderson in an undated photo from the Museum of Ventura County. (Source)

Lucy Hicks Anderson was a transgender woman living in Oxnard, CA for two decades before she was brought to court to defend her gender identity 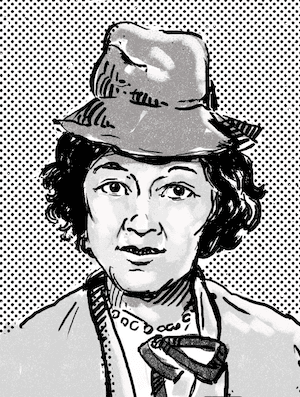 In 1886, Lucy Hicks Anderson was born as Tobias Lawson in Waddy, KY. Her parents, William and Nancy Lawson, were former slaves who settled in rural Kentucky to raise their children. As a young child, she insisted on being treated as a girl, preferring to wear dresses to school and going by the name, Lucy.

When Lucy was nine years old, her mother took her to a medical professional. The doctor examined her and determined the child should be raised as a girl to match her gender identity. Her mother agreed. Lucy Hicks Anderson would go on to live the rest of her life as a woman.

At age 15, Lucy stopped attending school and became a housekeeper. She moved from Kentucky to Pecos, TX and cleaned hotel rooms for about 10 years. In 1920, she married Clarence Hicks and the newlywed couple moved to Oxnard, CA.

Over the years, Lucy Hicks continued to work as a housekeeper and eventually saved enough money to purchase an old boarding house property, converting it into a brothel that she owned and operated. It was located in China Alley, an area known for “gambling, narcotics and prostitution.”

Despite the somewhat immodest nature of her profession, Lucy Hicks was well-respected in the Oxnard community throughout the 1920s. Recognized as a gifted chef and hostess, she hosted wildly popular dinner parties and won local culinary contests, including a 1926 competition in which her custard pie won first place.

Her dinner parties were in such high demand that they occasionally made the local paper, Oxnard Press-Courier. For instance, an August 3, 1927 entry highlighted her party at the Oxnard Community Center that brought together 65 people from throughout Ventura and Los Angeles counties.

Beyond the socialites of Ventura County, she also hosted events for men heading to war and their families. Later in her life, local press reported that she bought an estimated $50,000 in war bonds during World War II to support the war effort overseas.

In media reports of the era, Lucy Hicks is described as a thin, six-foot tall woman who often wore lavish dresses and donned other enviable garments of the 1920s. A Time Magazine article highlighted her decadent taste in fashion at the time:

“She wore bright, low-cut silk dresses from which her slatlike collarbones protruded, and she affected picture hats and high-heeled shoes. Her wigs were her pride —she had a long, black, wavy one, a short, straight, bobbed one, and for special occasions a shoulder-length job in red.”

In addition to party hosting, Lucy Hicks donated generously to nonprofit organizations such as the Red Cross and Boy Scouts, though she jokingly told recipients: “Just don’t ask where the money came from.” 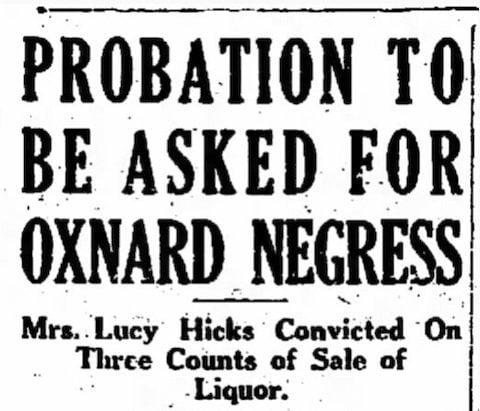 Newspaper coverage of Hick’s trial after she was charged with possession and sale of alcohol in 1928. (Source)

In spite of the glamor that dominated her public life, Hicks occasionally had run-ins with the law, particularly during the age of Prohibition. For example, she was arrested during a countywide alcohol sweep conducted by Oxnard police for possessing and selling liquor in May 1928. However, the town’s most wealthy banker, a man named Charles Donlon, bailed her out because he was on the guest list of one of her upcoming dinner parties and her arrest would postpone the event.

It should be pointed out that while Lucy Hicks’ transgender identity remained a secret, she achieved a certain social status within upper class white society that was largely unattainable for many Black women of the era.

In another brush with law enforcement, Hicks accused Ventura County Sheriff’s deputies of misconduct, alleging the men tried to force her and another individual to confess to crimes they did not commit. In the Oxnard Press-Courier, she said that the deputies tried to make them confess to paying off the chief of police in order to continue living in Oxnard. The 1927 article reports that witnesses said the deputies “treated them like dogs, swore and cussed at them, and savagely grilled them…”

In 1929, Hicks filed for divorce from her husband, Clarence. After her divorce and throughout the ensuing Great Depression, records of Lucy Hicks Anderson are difficult to find. However, it seems she re-entered the public domain in the 1940s.

In 1944, Lucy married Reuben Anderson, a soldier previously employed at a department store in Los Angeles before joining the Army during World War II. The following year, local Navy service members experienced an outbreak of venereal disease, and officials began investigating nearby brothels, including that of Lucy Hicks Anderson.

Investigators forced all women at the brothel to undergo medical examinations, including Lucy. She protested, arguing that she had not provided services to the patrons herself, but it was to no avail. Examiners discovered she was biologically assigned male at birth, and her gender identity burst open.

In 1945, the Ventura County district attorney charged Lucy Hicks Anderson with perjury for signing a marriage application with “another” man. During her trial, Lucy made an impassioned plea for her case, explaining to the jury that she had lived nearly her entire life as a woman, not as a means to defraud others, but to simply be her authentic self.

“I defy any doctor in the world to prove that I am not a woman,” she said in court. “I have lived, dressed, acted just what I am, a woman. It’s only petty maliciousness that is trying to cause me heartache and harm. If they would devote the same amount of energy to local problems that are hurting the community, it would be much better. I have lived a good life and a Christian life … I have lived a good citizen for many years in this town and am going to die a good citizen.” 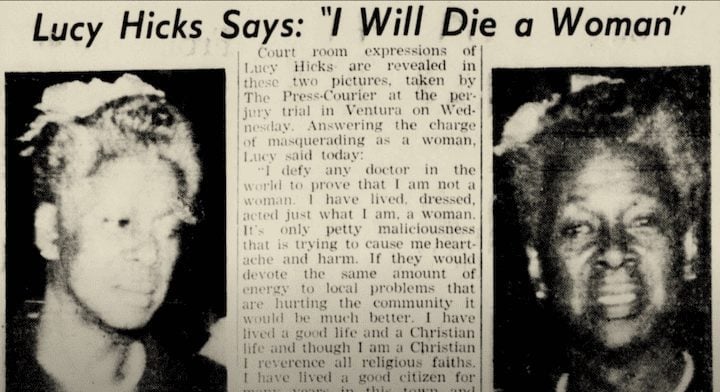 Oxnard Press-Courier coverage of Lucy Hicks Anderson’s courtroom trial in 1945 after the discovery of her transgender identity. (Source)

However, the jury found her guilty of perjury and a judge sentenced her to 10 years of probation. As a condition of her release, she was forced to wear masculine clothing because the court determined that she was a “man impersonating woman.” Unfortunately, Lucy Hicks Anderson’s legal problems did not end there.

As the spouse of a service member, she received allotment checks from the federal government. But because her marriage was found illegitime in court, both she and her husband were charged with fraud in 1946. The couple was found guilty and sentenced to separate federal prisons.

Local newspaper coverage of the conditions of Lucy Hicks Anderson’s release highlights that she must wear men’s clothing to stay out of jail. (Source)

After their release, Lucy and Reuben attempted to return to their home in Oxnard but found they had been banned from the town. They moved to Los Angeles and continued living together until Lucy’s death in 1954.

Though the term “transgender” would not enter the public vernacular until 15 years after her death, Lucy Hicks Anderson was a pioneer in bringing visibility and awareness to the transgender experience. She is widely believed to be the first person to advocate for their gender identity and defend their right to marry in a U.S. court. 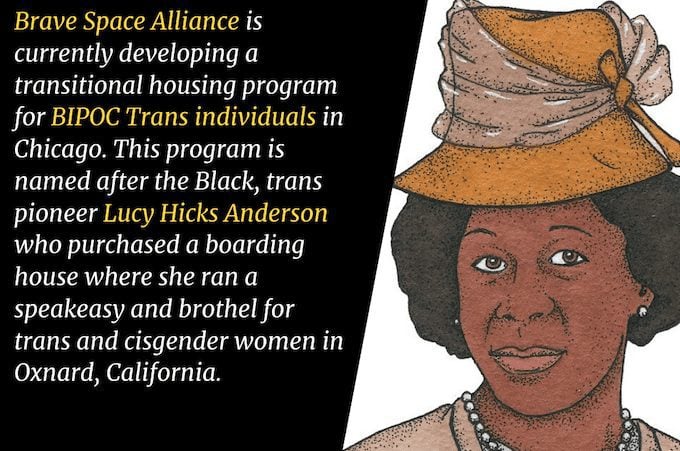 More stories: Why Is Bisexuality an Invisible Majority in the LGBTQ Community?