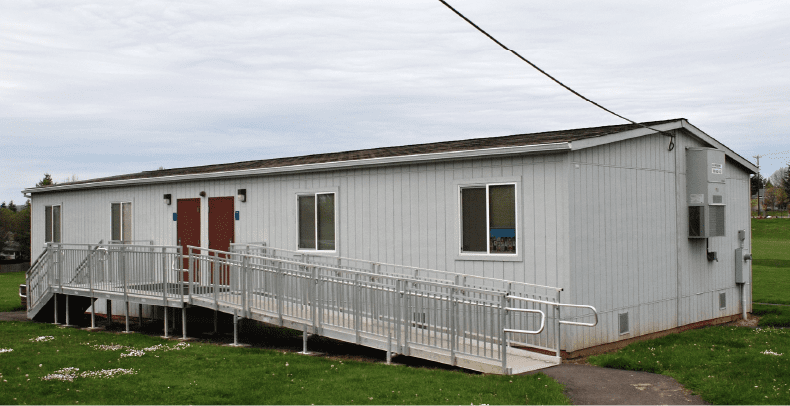 Many of us have spent some time during our academic careers within the four plywood walls of a classroom portable. True to their name, school portables are useful in a pinch, providing desperately needed classrooms to school districts with rapid-construction techniques. Portables can offer fast relief to school districts staggering under bursting student populations, but what were once quick-fixes are now permanent structures in schools across the U.S. And unless priorities surrounding education funding shift in a major way, there are here to stay.

School Portables in the U.S.

The main purpose of school portables, also called modular classrooms or prefab buildings, is to serve as temporary classroom space, particularly when schools must quickly accommodate growing student populations. Most portables are composed mostly of plywood and insulation materials, and school districts typically have the power to choose the prefab school building manufacturer they would like to supply their portables.

Not intended for use as permanent campus structures, decades-old school portables are commonplace in schools in the U.S., from coast to coast. Shrinking school budgets and exploding school populations, as well as bond failures at the ballot box have created conditions that make classroom portables as permanent as the brick and mortar school itself.

For example, Los Angeles Unified School District classroom portables account for 30% of all available classroom space, or about 8,300 portables total.

LAUSD Chief Facilities Executive Mark Hovatter sounded the alarm in 2015, saying to the school board that portables “are supposed to be temporary in use, and we might have stretched the definition of what temporary means in our case, but certainly the intent was not to be a permanent facility.”

So, what exactly are the effects of portable classrooms on students and teachers, and who is in charge of regulating these structures as they age?

Few Studies on How School Portables May Affect Student Health

Despite the popular use of portables in schools, just a small handful of studies in the last 20 years are dedicated to understanding the effects of portables on student health. Much of the data gathered about California schools below is taken from a 2004 study into portable classrooms by the California Air Resources Board, and arguably remains the most comprehensive study of its kind today.

Beyond the health effects portable classrooms may have on teachers and students alike, studies have found negative trends with student performance and the use of portables.

A 2009 study completed by Texas Tech University focused on the question of how school facilities can impact student academic success in the state of Texas. It measured student success by TAKS scores. TAKS stands for Texas Assessment of Knowledge and Skills, the state’s standardized test taken by thousands of students every year.

The study found that reducing the number of portable school buildings in rural high schools had a positive effect on student test scores: “For every 10 percent reduction in the percent of portable square feet per student of school facilities, the average TAKS scores increased by 11.38 points and the average years of teacher experience with the district increased by 2.32 years.”

In addition, higher percentages of portable classroom usage were associated with higher rates of teacher turnover. Finally, the study found that high schools using the largest percentages of school portables also had some of the largest poor and minority student populations.

While there are many state laws across the United States that establish standards for proper air quality, construction materials for public school buildings and more, those laws do not apply to school portables. Currently, no state laws regulate the use of portables in schools. Some states do offer recommendations of some form or another, but there are no legal requirements for how many portables school districts are allowed to use, for how many years students can use them, and so forth.

Some states, such as Washington state, require certain standards for construction materials that are being used to build a new school. Those standards include environmental rules that must be followed to quality for state funds. School portables, however, are excluded from those requirements.

Private manufacturers of modular buildings offer upgradable options that school districts can take advantage of, including improved HVAC systems and non-toxic building materials. However, those options cost more money. And for a school district that’s already strapped for cash, modern upgrades to school portables aren’t on the table.

In fact, the choice between saving more money and purchasing portables with updated features is so commonplace for school districts, that the EPA explicitly addresses this dilemma on its website. The agency recommends that “care should be taken during specification and selection to ensure that the students’ health is not compromised for inexpensive, low quality designs.”

The Permanence of School Portables as Classrooms

School administrators across districts of all types socioeconomic and academic backgrounds say they do not prefer to use portables at school, but there are no other options when districts have little money and growing student populations need classrooms.

At Beaverton Unified School District, 40% of all portable classrooms are at least 20 years old. The oldest was built in 1969 and still functions as a 4th-grade classroom. That being said, voters approved a bond measure that allows the Beaverton school district to build 3 new schools and expand others.

Other school districts tried and failed to get bond measures passed. A bond measure in 2008 would have allowed Evergreen to build 3 elementary schools, a middle school, and more facilities. However, voters rejected the measure. Out of money and out of options, Evergreen Public Schools added more than 100 school portables to its campuses.