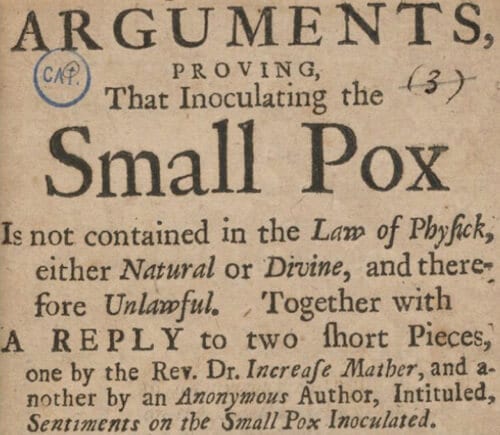 Amid Boston’s 1775 epidemic, Washington advocated for smallpox inoculation during the Revolutionary War

During the Revolutionary War in 1775, an out-of-control smallpox epidemic ravaged Boston and thousands of soldiers serving in the Continental Army. Commander in Chief George Washington understood first-hand the dangers of smallpox, and formulated a plan to protect his troops from the virus. Washington strongly advocated for smallpox inoculations, or vaccinations, for his men. The resulting backlash over inoculation throughout times of epidemic in the colonies would prove to be as old as America itself.

Boston has a long history of enduring major smallpox outbreaks before the 1775 epidemic. The city had already undergone deadly smallpox epidemics in 1721, 1752, and 1764. Death rates during these public health crises were high, with Boston’s most recent outbreak at a death rate of 18%.

Whenever an outbreak occurred, Boston shut down its schools and colonists spent more time in their homes. Wealthier Bostonians fled the crowded city for rural areas and waited out the epidemic safely. Because cities like Boston and Philadelphia were often overcrowded, social distancing and hygienic measures were extraordinarily difficult to follow. Subsequently, smallpox infections spread rapidly.

Colonists had some understanding of how to limit spread of the virus, though their knowledge was limited. For example, the “six foot rule” existed in the colonies, but it didn’t mean what it does today. Common belief at this time held that family members of a person with smallpox must “hang out on a pole at least six feet in length, a red cloth not under a yard long, and half a yard wide from the most public part of the infected house.” This red flag of sorts served as a “quarantine warning” to passersby to keep others from approaching the home.

Early cases of smallpox inoculation in Boston can be directly traced to a West African slave named Onesimus. He had been inoculated against smallpox by his people before being taken slave and sent to the colonies. As the Boston smallpox epidemic devastated colonists in 1721, Onesimus shared this medical knowledge with his owner, the Rev. Cotton Mather. Mather then passed the idea to his friend, Dr. Zabdiel Boylston. Dr. Zabdiel Boylston inoculated Bostonians against smallpox in secret and under threat of death in 1721. (Source)

The process of inoculation, or “variolation” as it was called during the colonial era, was not an exact science. To inoculate, a doctor cut a small incision into the patient’s arm and inserted a controlled dose of the virus into the wound. The idea then, as is today with vaccination, was to infect a patient with enough of the virus to trigger an immune response, but not so much that the patient became severely ill. Rudimentary though it was, this method of smallpox inoculation was highly effective in providing colonists with immunity to the deadly disease.

With a death rate of nearly 15% for the 1721 smallpox outbreak, Boylston was willing to give inoculation a try. Boylston inoculated his 13-year-old son, John, and two slaves through variolation. It was successful, and all three patients gained immunity to smallpox.

However, once word got out about the vaccination procedure in Boston, many locals were furious. And some particularly incensed colonists looked to take matters into their own hands.

Backlash to Smallpox Inoculation in Boston

Once news broke that a nearby doctor provided smallpox inoculations in the city, Boylston received a torrent of death threats. For concerns over his safety, he went into hiding for several days. Police arrested Boylston as soon as he re-emerged publicly.

While Boylston remained in prison, his wife and children were targeted next. While they sat in their home, an identified person threw a lit grenade into one of the rooms. But before the grenade could explode, the fuse disconnected from the explosive and it failed to detonate.

After the attack, Boylston was released from jail only when he promised to never inoculate another person again. However, he continued to inoculate Bostonians in secret, and only in the dead of night while wearing a disguise. Despite the onslaught of attacks and death threats, Boylston persisted in protecting his neighbors from the deadly smallpox virus.

Boylston reported that of the 247 people he inoculated in Boston, six patients died. With a mortality rate of 2.4%, receiving the smallpox inoculation in 1721 was far safer than contracting smallpox with its death rate of 15%.

During the Revolutionary War, the possibility of smallpox outbreaks among troops in the Continental Army was a matter of grave concern to its commander in chief, George Washington. Having survived smallpox as a teenager, Washington was keenly aware of the virus’ dangers and its greater implications as an epidemic. He recognized that his soldiers must avoid smallpox at all costs if they stood any chance against defeating the British army. But that would be an uphill battle all its own.

Already-crowded cities flooded with new recruits as men across all 13 colonies signed up to serve in the Continental Army. In addition, soldiers on the battlefield stayed together in camps that provided little ability to socially distance. As hundreds and thousands of people gathered together in the same areas during wartime, smallpox continued to spread rapidly.

And perhaps was the 1775 smallpox epidemic no worse anywhere in the colonies than in Boston.

Smallpox Epidemic At Siege of Boston 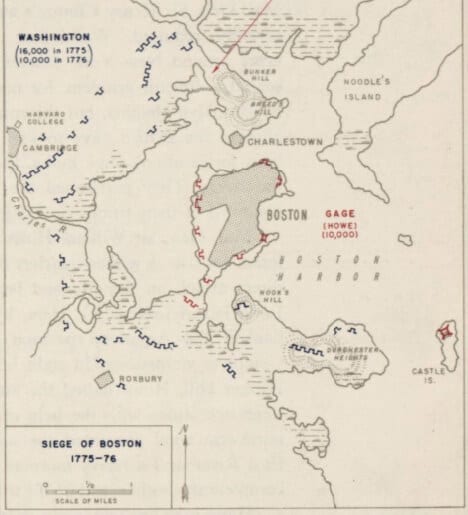 As soldiers from Britain traveled to the New World to fight in the Revolutionary War, they brought smallpox. Because Europe had dealt with smallpox epidemics for generations, many troops already had immunity to the virus. Unfortunately, Bostonians had no means of avoiding the infectious disease when British soldiers occupied the city from April 1775 to March 1776.

During the Siege of Boston in summer 1775, George Washington noted many of his soldiers contracted the virus while living in a camp outside the city. To limit the spread of smallpox among his men, Washington enforced his own virus protocols. He ordered any soldier showing symptoms to isolate and quarantine away from the group. Additionally, he prohibited any Bostonian from approaching the camp to avoid new infections.

After British forces withdrew from Boston in March 1776, Washington carefully selected the soldiers who entered its war-torn borders. He understood that survivors of smallpox did not  contract the virus again. So, he sent only troops who had survived the virus into Boston, knowing they would not be re-infected. Ultimately, more than 1,000 smallpox-immune soldiers from the Continental Army entered Boston.

Still, Washington knew he needed plenty of healthy troops for the tough battles to come. So he began to push for public inoculation against smallpox in the colonies. 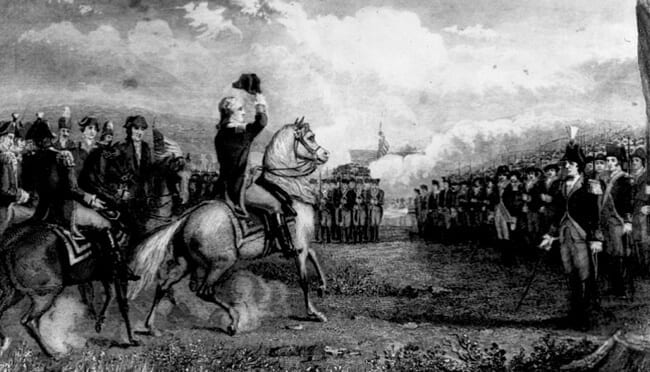 Illustration of Gen. George Washington speaking to his troops during the Boston Siege at the beginning of the Revolutionary War. (Source)

Throughout the course of the Revolutionary War, Washington became an ardent advocate for smallpox inoculation using the variolation method. But he was selective with its application, and made executive decisions on who would be inoculated first.

Washington chose to first vaccinate new recruits over soldiers currently on the battlefield. Because recovery times from smallpox inoculation could last weeks, Continental Army forces needed to stay healthy while facing off against the British. On the other hand, new recruits had time to get their strength back before heading for the front lines.

Moreover, Washington gave strict orders to his generals to follow protocols and limit virus spread in their ranks. Some listened, others did not.

Major General John Thomas, who commanded more than 10,000 troops in Quebec, did not follow Washington’s virus guidelines. As a result, 1 out of every 3 soldiers in his command died from smallpox. Even Gen. Thomas himself perished from it. In fact, the infamous retreat of colonial troops from Quebec is partially blamed on smallpox infections.

Despite the smallpox vaccine’s effectiveness and Washington’s public support, the Continental Congress went decidedly anti-vax. In the middle of the smallpox epidemic in 1776, Congress passed an ordinance that prohibited Army surgeons from inoculating soldiers. Furthermore, colonists passed many local- and state-level ordinances that outlawed inoculation within their borders altogether. 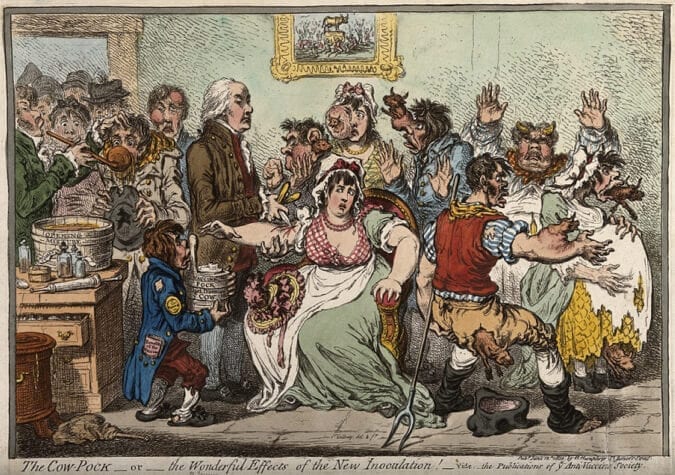 A colonial cartoon opposed to smallpox inoculation. It portrays an inoculation hospital filled with patients exhibiting strange side effects from the vaccine. (Source)

Christian institutions were also strongly opposed to inoculation. The clergy argued that smallpox was “God’s way to punish sinful people, and trying to prevent the malady was to interfere in God’s populace.” As it often still is today, inoculation became a fiery topic in public opinion, and polarizing debate quickly overtook science.

Despite the congressional order to halt all inoculations of soldiers during the Revolutionary War, Washington continued to vaccinate his men. In February 1777, Washington wrote to the president of the Continental Congress, John Hancock, that he had ordered all soldiers in the Continental Army to be inoculated. 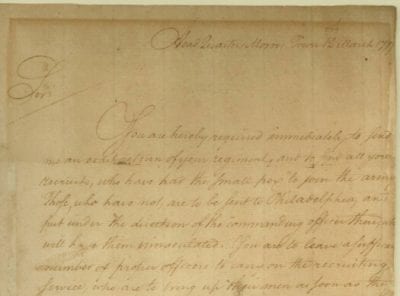 A 1777 letter from George Washington orders the 7th Pennsylvania Regiment to take new recruits to Philadelphia so they can be inoculated for smallpox. (Source)

By the end of that year, about 40,000 troops were inoculated against smallpox. Infection rates dropped from 20 percent to 1 percent.

As the undeniable proof of variolation spread, the Continental Congress reversed its position on inoculation. Lawmakers repealed local bans on inoculation across the young nation. Before the end of the Revolutionary War, colonists began to be inoculated for smallpox.

When Boston was hit with another smallpox epidemic in 1792, Bostonians quickly approved an order for inoculation by a massive majority. The need for public inoculations against a common deadly foe had become an accepted fact during epidemics. It seems America will continue to re-learn this lesson throughout each and every pandemic, from the 1721 smallpox epidemic to the COVID-19 pandemic in 2020. And for the love of science, when the vaccine becomes available to you, get it.

More stories: The Legend Of Sadie The Goat in 1860s New York City