America Has The Highest Maternal Mortality Rate Among Western Nations 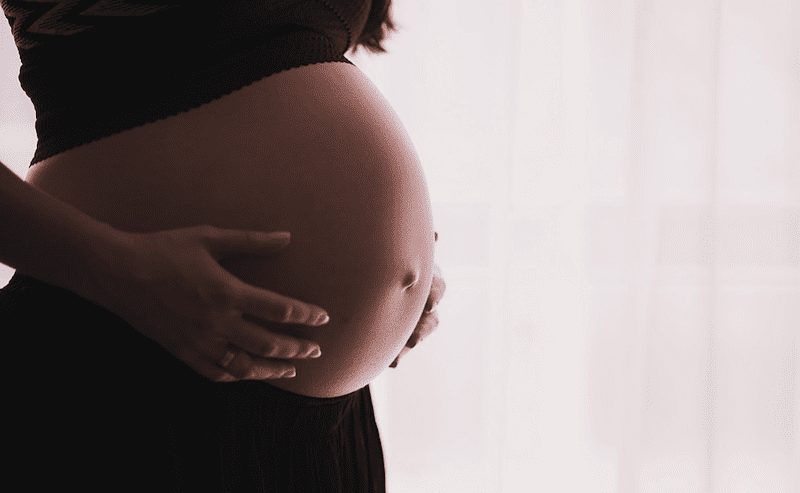 Compared with other wealthy countries such as the United Kingdom and Canada, the United States has the highest maternal mortality rate by far. (Source)

Among Western, high-income countries, the United States has the highest maternal mortality rate by a wide margin. Becoming pregnant in this country is far more medically dangerous than it is in the United Kingdom, Canada, Australia, and other wealthy nations. And with the loss of federal abortion rights in June 2022, millions of American women lose the right to protect their own lives the moment they are impregnated.

The maternal mortality rate is a national count of deaths that occur because of pregnancy, delivery, or postpartum recovery up to 42 days after giving birth. In a massive 2020 study that examined the maternal mortality rates of 11 high-income countries across the globe, researchers found that the U.S. has the highest rate of maternal deaths. This study discovered that America had 17 maternal deaths per every 100,000 live births in 2018, nearly double the rate of the country with the next highest mortality rate, France, at 8.7.

Compared with 10 other Western, high-income countries, the United States had the highest maternal mortality rate at 17.4 in 2018. This rate is nearly double the next highest mortality rate of France at 8.7. (Source)

Compared with other Western countries with well-funded healthcare systems such as Canada, Australia, the United Kingdom, and Germany, the maternal mortality rate in the United States is shockingly high, and more than triples the rates of 7 other countries examined in this study.

When breaking the numbers down, researchers found that about 30% of maternal deaths transpire during pregnancy, while 17% occur the day of delivery. The vast majority of maternal deaths, a little more than half (52%), occur postpartum.

With over half of maternal deaths in the U.S. attributed to postpartum recovery in the days and weeks after delivery, it’s worth exploring what America does differently than other countries when it comes to postpartum care.

Why Are Maternal Deaths In The U.S. So High?

Simply put, the United States fails to provide adequate resources and support to pregnant women and new mothers. Unlike every other high-income country investigated in the 2020 study, the U.S. is the only nation that does not have guaranteed paid leave for mothers after giving birth. With more than half of maternal deaths occurring after childbirth, it’s inexcusable for a country with this much wealth and resources to fail to provide any federal support.

The United States is the only high-income nation in this study that fails to provide any guaranteed paid leave to new mothers after childbirth. The other 10 countries provide at least 14 weeks of paid leave. (Source)

The United Kingdom, Canada, Australia, France, New Zealand, and other Western countries mandate at least 14 weeks of paid leave from work for new mothers to heal and recuperate from the physical and emotional trauma of giving birth. America, on the other hand, provides zero weeks of paid leave.

Furthermore, the U.S. has no universal maternal care coverage to address pregnancy, day of delivery, and postpartum recovery needs. The Affordable Care Act helped bridge some gaps when it went into effect, but coverage varies wildly by state. For many women, especially those with few financial resources and obstacles to receive quality care in their area, their level of coverage depends on the region they happen to live in.

Moreover, when maternal mortality rates in the U.S. are broken down by race, the systemic racism that infiltrates every part of this nation cannot be ignored.

More stories: How SSI $2,000 Limit Keeps Those with Disabilities in Poverty

In the U.S., Black and Native women suffer the highest maternal mortality rates. A 2020 study conducted by the Kaiser Family Foundation found that Black women are 3 times more likely than white women to die from complications due to pregnancy and postpartum recovery. Similarly, Native women face a maternal mortality rate that is 2 times higher than that of white women.

According to numbers from the Centers of Disease Control & Prevention (CDC), the maternal mortality rate for Black women in America was 55.3 in 2020. White women had a mortality rate of 19.1 in the same year. 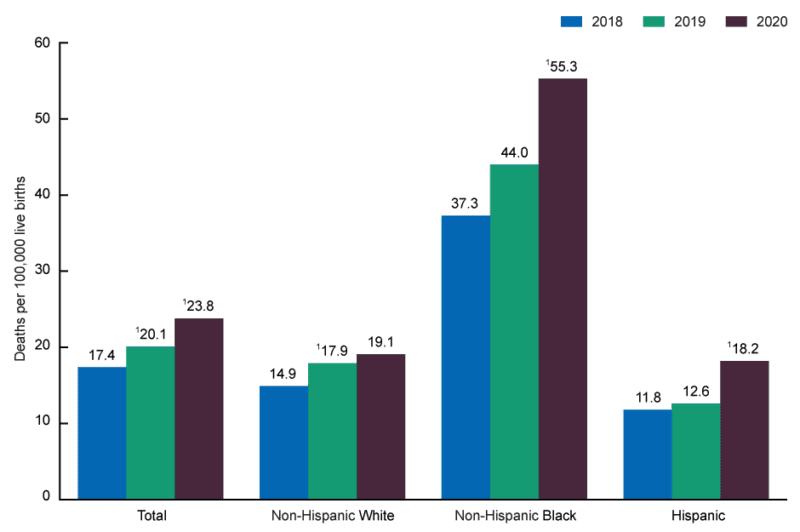 Data from the Centers for Disease Control and Prevention (CDC) show that maternal mortality rates in the U.S. have increased each year from 2018 to 2020. Black women have the highest maternal death rate, regardless of year. (Source)

Even when controlling for education levels, the racial disparities remain drastically stark. Among all women with a college degree or higher, Black women are more than 5 times more likely to die than white women. Furthermore, the maternal mortality rate of college-educated Black women is still 1.6 times higher than that of white women with less than a high school diploma.

Higher education levels are typically associated with higher income and improved accessibility to quality healthcare. But even those support systems fail to protect Black women from disproportionally high maternal mortality rates when compared with white women with far fewer resources.

Racial bias in medicine is a well-documented phenomenon in America. Numerous studies demonstrate that racism in medicine contributes to worse medical outcomes for people of color, particularly Black patients, when it comes to pain management, accurate diagnoses of conditions, and health outcomes. While accessibility to care and financial resources play a role in overall health, a patient’s race has a massive impact on whether or not they receive adequate medical care in the U.S., which often entails life or death consequences.

Perhaps no study quite encapsulates this phenomenon more succinctly than a 2006 study that examined 5 common medical conditions which caused maternal deaths over an 11-year period. It found that Black women were 2 to 3 times more likely than white women to die from the exact same conditions, including preeclampsia and postpartum hemorrhage. These statistics are all the more shocking when we acknowledge that most pregnancy deaths are considered preventable. It’s the level of medical care (or lack thereof) that heavily contributes to these flagrant disparities in health outcomes by race.

Maternal Mortality As It Relates To Abortion

When pro-choice advocates say “abortion is healthcare,” they are correct. Pregnancy and postpartum recovery are dangerous, injurious, and sometimes deadly. However, legal abortion is not. According to a study that examined mortality rates and legally induced abortions in the U.S. over an 8-year period, carrying a pregnancy to term is 14 times more dangerous than having a legal abortion.

Furthermore, abortion is necessary to save women’s lives in the case of ectopic pregnancies, ruptured membranes with infection, and other deadly conditions that pregnancy can cause. Abortion is healthcare, plain and simple.

With the loss of the right to bodily autonomy for millions of women in the U.S., more people will die without abortion access. For example, a 2021 study found that the nationwide maternal mortality rate is expected to increase by at least 20% with a national abortion ban. If those horrific statistics were attributed to any other country, the same conservative politicians who celebrated the fall of Roe would condemn that nation as barbaric and cruel. However, when it happens in their own backyard, they pretend those deaths don’t count, or don’t occur at all.

The same lawmakers who give more rights to guns than children shot to death in their classrooms call themselves pro-life on the topic of abortion. But ending abortion access has nothing to do with protecting life, and everything to do with control. If being pro-life had anything to do with protecting life, America would have universal paid leave and universal childcare to support mother and baby. But conservatives consistently rail against those ideas in the name of “freedom,” leaving women with even fewer resources to make choices for their own lives and families.

To ban abortion is to legalize forced birth. And with how horrific the maternal mortality rate is in the U.S., anti-abortion laws kill women. More women, especially those with limited financial resources, will die at the hands of their government because a man impregnated them. More Americans will die because they are unfortunate enough to have a government that would rather end their lives than provide federal abortion access. A country that does that to its own people is not a country that has freedom.

More stories: 27 School Shootings In The First Half of 2022