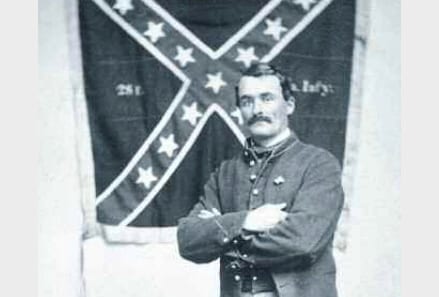 Private Marshall Sherman with the 1st Minnesota stands in front of a Confederate battle flag he captured during the Civil War. (Source)

At the Battle of Gettysburg, Private Marshall Sherman with the 1st Minnesota Infantry captured a Confederate battle flag. It belonged to the 28th Virginia Infantry. The flag’s journey and its many controversies as a captured Confederate flag tells the story of a nation that continues to grow and deal with the Civil War’s painful history. 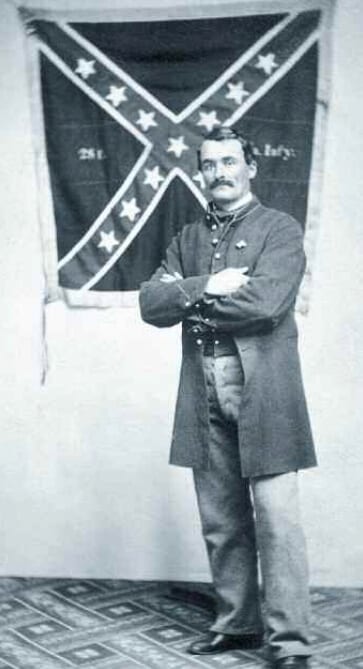 Sherman poses in front of the Confederate battle flag he took during Pickett’s Charge in 1863. (Source)

Marshall Sherman was a 40-year-old house painter in St. Paul when he joined the 1st Minnesota Infantry as a private in the Union army. Described as a soft-spoken gentleman in historical accounts, Sherman fought in the Battle of Gettysburg alongside the rest of the 1st Minnesota.

This brutal confrontation became the site of the highest number of casualties of the Civil War. One Union soldier from Minnesota described the Battle of Gettysburg as such:

“If men ever become devils that was one of the times. We were crazy with the excitement of the fight. We just rushed in like wild beasts. Men swore and cursed and struggled and fought, grappled in hand-to-hand fight, threw stones, clubbed their muskets, kicked, yelled, and hurrahed.”

On the third and final day of fighting at Gettysburg on July 3, 1863, Pvt Marshall Sherman took the Confederate battle flag belonging to 28th Virginia Infantry. After Pickett’s Charge, a massive turning point that led the Union to victory, Sherman emerged with the tattered flag. It was one of 25 Confederate flags captured by the Union Army that day.

Marshall Sherman received a Congressional Medal of Honor for capturing the Confederate battle flag at Gettysburg. Like all other captured battle flags, the 28th Virginia flag was sent to the War Department for storage. During this era, very little concern was paid to Confederate flags taken during the war. For decades, they were stored in the basement office of the War Department’s building’s superintendent.

Sometimes, government officials borrowed flags for different public events or purposes. Many battle flags never made it back to the War Department, including the battle flag that Sherman captured at Gettysburg. 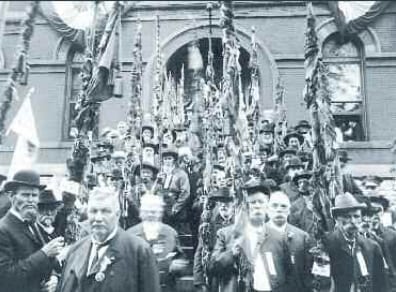 Veterans of the 1st Minnesota carry battle flags during a Flag Day ceremony in June 1905. (Source)

In 1888, Congress ordered all captured Confederate battle flags in possession of the War Department be itemized and accounted for. The flag that Sherman captured 25 years prior was listed as loaned and never returned.

As it turns out, the flag had been on public display at the St. Paul Cyclorama since 1886. This massive public spectacle showcased large panoramas and cycloramas that portrayed major events of the Civil War.

Marshall Sherman had the battle flag in his possession, and loaned the flag to the Gettysburg exhibit for the past two years. Panorama artists even painted his likeness next to the displayed battle flag in St. Paul.

The location of Virginia’s 28th battle flag was quite the open secret in Minnesota. But it seems no one told Congress, and no War Department official asked about it. 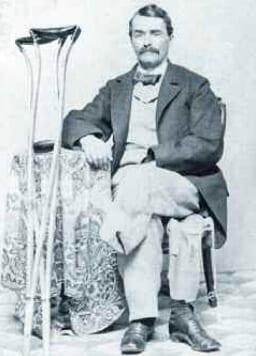 Marshall Sherman lost his leg in August 1864 after re-enlisted in the war. (Source)

Marshall Sherman lived in Minnesota until he was 73 years old, and died in St. Paul in 1896. At his funeral, a fellow veteran of the 1st Minnesota Infantry brought the battle flag he captured more than 30 years prior. The flag was then donated to the Minnesota Capitol building and placed into storage.

At the 35th reunion of 1st Minnesota veterans in 1902, the same Confederate battle flag was brought out for the event. It was soon after placed in possession of the Minnesota Historical Society. This would serve as the last time the 28th Virginia battle flag was mentioned in Minnesota state history until 1996.

Exactly one hundred years after his death, Marshall Sherman was reunited with his captured Confederate battle flag at a commemoration event honoring his death. The flag was placed near his grave during the ceremony.

However, this public remembrance renewed interest in the flag’s history. Many Virginians became upset that Minnesota held on to one of their Confederate battle flags from the Civil War.

Roanoke Civil War reenactors who represented the 28th Virginia Infantry Regiment officially asked for the return of the flag in 1998. They appealed directly to the Minnesota Historical Society, who then asked the state attorney general office for help.

Minnesota’s assistant attorney general denied the Virginians’ request, but the word was out. Now, Virginia’s state lawmakers wanted to get involved.

In 2000, both the Virginia House and Senate passed a resolution that formally requested Minnesota return the flag. Again, the Minnesota Historical Society refused. 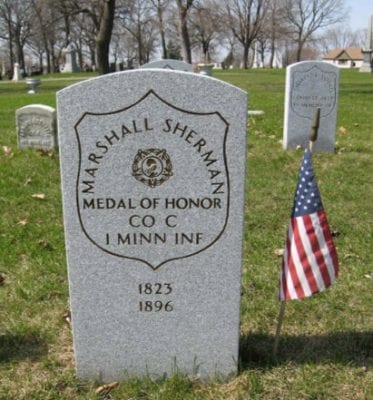 Ahead of the 150th anniversary of Gettysburg in 2013, Virginia Gov. Bob McDonnell requested the flag be loaned to his state to commemorate the Battle of Gettysburg. Minnesota Gov. Mark Dayton denied that request, saying that returning the battle flag would be “sacrilege” to Union soldiers who died in the Civil War.

“It was something that was earned through the incredible courage and valor of men who gave their lives and risked their lives to obtain it,” Dayton said. “And as far as I’m concerned, it’s a closed subject.”

To this day, the Confederate battle flag that Union soldier Marshall Sherman captured more than 150 years ago remains in Minnesota’s possession.

Removal of Confederate Monuments in 2020

According to the Southern Poverty Law Center (SPLC), a total of 168 Confederate symbols were removed from U.S. public property in 2020. Nearly all of these removals came after the killing of George Floyd by police.

However, the SPLC estimates that more than 1,700 Confederate monuments, statues, and symbols remain displayed on public property in the U.S.

Many Americans don’t realize that monuments honoring Confederate leaders and soldiers were primarily built during two periods of American history: the height of Jim Crow and the Civil Rights movement.

Certain states sought to build and convey symbols that honored the Confederacy in direct reaction to Black Americans’ fight for equality. Every time a government body placed a Confederate monument at a courthouse or capitol building, it was intimidation. It was further evidence that African Americans were not subject to an equal system of justice or citizenship.

Keep it up, Minnesota. Virginia’s never getting that flag back.