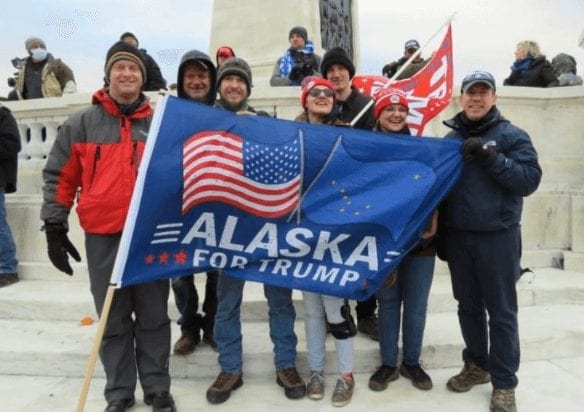 Alaska state Rep. David Eastman posts a Facebook photo of himself with an “Alaska for Trump” flag at the Capitol building in Washington, D.C. on January 6, 2021. (Source)

Rep. David Eastman’s Statements at the D.C. Capitol on January 6 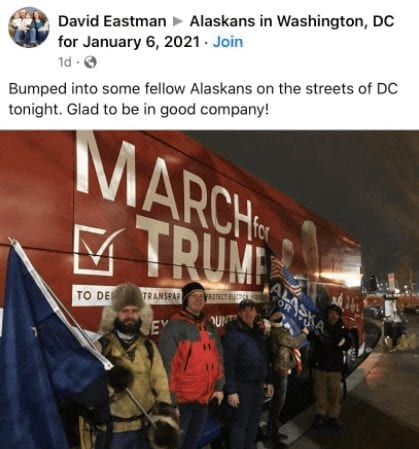 On the day of the Capitol mob attack by pro-Trump insurrectionists, Alaska state Rep. David Eastman posted a photo of himself with other right-wing demonstrators on the steps of the Capitol building while holding an “Alaska for Trump” flag. One day earlier, Eastman told his followers on social media he would be in Washington D.C. to “encourage members of Congress to do their duty,” referring to the debunked conspiracy theory that the presidential election was stolen from Donald Trump.

In an interview with Anchorage Press in Washington D.C. on January 6, Republican David Eastman further spread false election fraud conspiracies: “One of the concerns that I have and others that I represent have deals with the way in which we deal with elections in this country and concern over how that’s going to carry forward, and I think that’s a profound question and I think there’s a lot of justified concerns there, so as a voice to represent those concerns that’s also part of why I’m here.”

In the hours after the Capitol coup attempt in which five people died and multiple pipe bombs were found on federal property, Eastman shared a post on Facebook that baselessly blamed a “‘bus load’ of Antifa thugs” for the attack. The FBI and other U.S. intelligence agencies have consistently debunked this conspiracy and confirmed it was pro-Trump rioters who breached the Capitol. 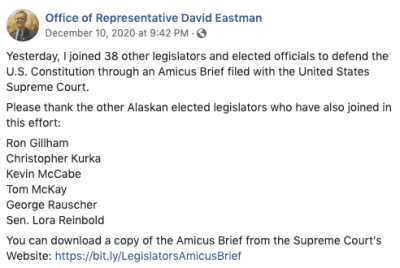 Rep. David Eastman tells his Facebook followers on December 10, 2020 that he filed an amicus brief in the Texas lawsuit seeking to overturn 2020 election results in a handful of states that voted for Joe Biden. (Source)

Since the 2020 presidential election, Eastman has escalated his “stolen election” rhetoric as a member of the Alaska House of Representatives. On November 6, 2020, the day that Joe Biden closed in on winning Georgia and Pennsylvania, Eastman released an official statement in which he says he has growing concerns of “voting irregularities” in Alaska and Pennsylvania.

On December 9, he said he requested a “full audit of the 2020 general election” from Alaska’s lieutenant governor due to concerns over election fraud, despite no evidence. And like Missouri state Rep. Justin Hill, Eastman filed an amicus brief in the Texas lawsuit that sought to overturn election results in multiple swing states that voted for Biden. Eastman then argued in a Facebook post that this attempt at subverting democracy would actually “defend the U.S. Constitution.” 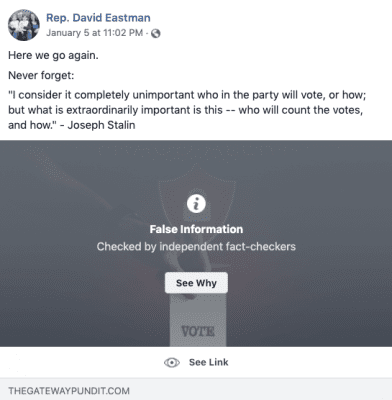 David Eastman shares a fake story from a pundit website that suggests the 2020 presidential election was stolen from Trump voters one day before the Capitol riot. (Source)

Particularly in the weeks before the Capitol attack, Rep. David Eastman shared inflammatory election fraud falsehoods and related conspiracy theories on social media and on his personal blog. In December, he posted an anti-mainstream media conspiracy and a bogus story about an audit of Dominion voting machines. On January 5, he quoted Joseph Stalin in a Facebook post linking to an untrue story about GOP poll monitors being blocked from ballot counts.

Beyond social media, Eastman’s personal blog contains some of his most conspiratorial statements under a thin guise of faux intellectualism that doesn’t hold up to scrutiny. On January 3, Eastman published an article titled “What Happens When Losing an Election Becomes Intolerable?” In a piece that seems to take place in a different universe, Eastman argues that Democrats are actually the ones unable to accept election results, and that’s why they stole the election for Biden. These untrue claims have been proven false over and over, but Eastman continued to spread incendiary and out-of-touch-from-reality rhetoric that undoubtedly a number of his most ardent supporters take as fact. 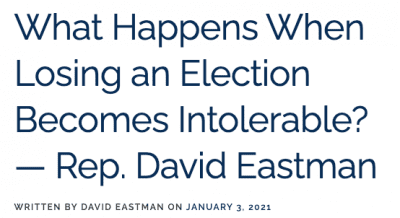 “What Happens When Losing an Election Becomes Intolerable?” is a conspiratorial piece written by David Eastman on his personal website on January 3, 2021. (Source)

One day before the Capitol attack by a pro-Trump mob, Eastman published a post on his website called “Trump Lost and Jeffrey Epstein Killed Himself.” As the headline would suggest, this article is filled with conspiratorial greatest hits, from Dr. Fauci’s role in Covid-19 to Hillary Clinton’s emails, Big Tech to 2020 election fraud. An incredible cacophony of lies and conspiracies directly into the media diet of his supporters. I won’t repeat the mudslide of falsehoods on here, but it is something to behold.

In a dog whistle we all can hear, David Eastman calls for Congress to have state legislatures in those “contested” swing states that Biden won to “certify the winner of the state.” In other words, reject the will of the people and allow Republican-led legislatures to overturn their states’ electoral votes from Biden to Trump, giving him a second term and subverting democracy itself. 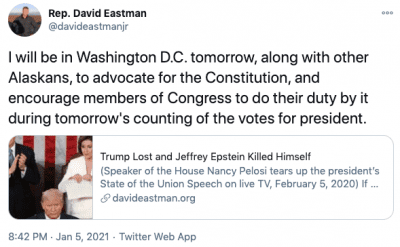 Alaska Rep. Eastman tweets on January 5 that he will be in Washington, D.C. as part of pro-Trump demonstrations on the following day. (Source)

Eastman concludes in this piece that “For every allegation of widespread voting fraud that may be disproven there are two dozen cases of state election laws that were obviously broken, safeguards that were ignored, and examples of voters who were denied the ability to verify that their vote, and the votes of their neighbors, were properly counted.” Despite zero evidence and an avalanche of debunkings, Eastman continued to breathlessly spread bogus claims of a stolen election ahead of the Capitol attack.

What David Eastman Said & Did After the Capitol Attack

On January 7, Eastman said he did not witness any violence at the pro-Trump demonstrations, and left before rioters breached the Capitol. He further wrote in the Facebook post that the attackers “should be speedily identified and put before a jury of their peers for public trial.” He again mentioned Antifa as possible culprits, and did not acknowledge the influence his own rhetoric may have had in the Capitol attack. 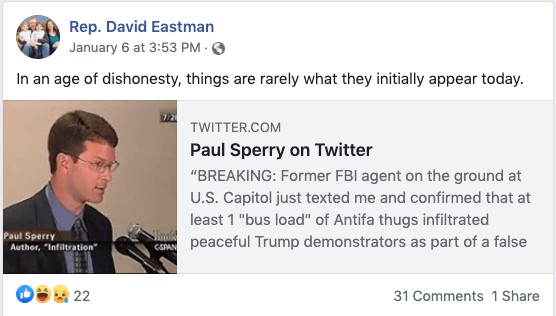 David Eastman falsely blames Antifa for the Capitol riot and coup attempt in a Facebook post on January 6, 2021. (Source)

After the coup attempt in Washington, D.C., Eastman continued to share incendiary posts on social media. Examples include an anti-CNN meme because they called Capitol insurrectionists “rioters” instead of “protesters,” as well as an article where Rush Limbaugh laments anti-conservative “dissent” on Facebook and Twitter after they cracked down on white supremacist and pro-insurrectionist accounts, such as Donald Trump’s.

More recently, on January 15, David Eastman appeared to equate the crimes committed at the Capitol with false claims of election fraud during the 2020 presidential election. Two days later, he told his followers on Facebook that the right-wing messaging app known for its violent and hateful rhetoric, Parler, was back online.

In 2017, he became the first Alaska House Representative to be censured after he publicly suggested that Native women are glad to get pregnant and receive abortions for “a free trip to Seattle.” When pressed, Eastman admitted he had no evidence, but said he had heard stories from people who came to his office.

Rep. Eastman equates the crimes committed at the Capitol attack with untrue claims of voter fraud in the 2020 presidential election on January 15, 2021. (Source)

Earlier that week, he successfully changed language in a resolution meant to raise awareness about sexual assault and child abuse to instead call abortion “the ultimate form of child abuse.” In the same year, he voted against a bill that honored Hmong veterans in the Vietnam War and voted against recognizing Black History Month. In March 2020, House Republicans put Eastman on probation for reasons they did not disclose to the public.  A few days later, Republicans stripped Eastman of his committee positions.

A petition calling for David Eastman’s resignation from the Alaska House currently has 2,692 signatures.