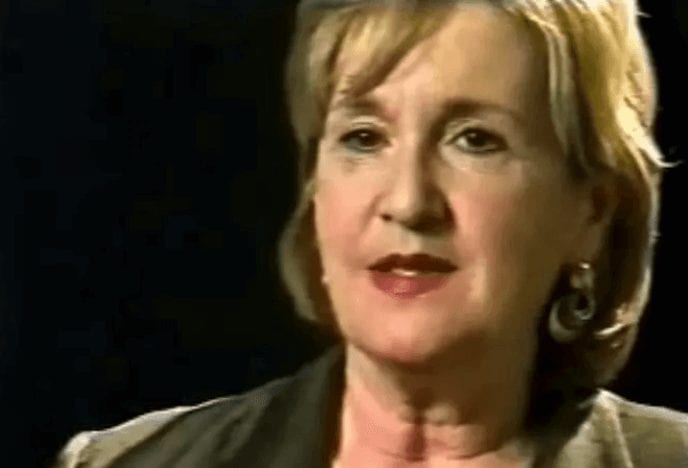 Ellen Halbert speaks about her work with restorative justice in a 2001 documentary called “Meeting with a Killer.” (Source)

After surviving an attack in 1986, Ellen Halbert worked with survivors of violent crime and became an advocate for restorative justice

In 1986, an 18-year-old man broke into Ellen Halbert’s home in Texas and spent the night undetected in the attic. The following morning, Halbert’s husband left to play golf while her son spent the day at a friend’s house. As she stepped out of the shower, Halbert came face-to-face with the intruder. Her attacker wore a “ninja suit” and carried a hammer and a large knife. Halbert said in a later interview it was “the biggest knife I had ever seen.”

She told him to get out of the house, but he knocked her to the ground and tied her up. Over the following two hours, Halbert was raped, stabbed, and beaten with a hammer by her assailant. Halbert said she didn’t know how many times the man hit her in the head, but the surgeon who “put her head back together” estimated that she endured “8 to 10 areas of impact.”

Halbert’s assailant stabbed her multiple times in the neck and chest before stabbing her in the head in a final blow. She said he had to put his foot on her head to wrench the knife out of her skull. Believing she was dead, the man escaped Halbert’s home with an $800 check he forced her to write.

Against all odds, Ellen Halbert not only survived the vicious assault, but remained conscious enough to drag herself to the phone and call her parents. They quickly arrived at the house and called the police. Halbert’s attacker was caught later that day as he tried to cash a check he forced her to write earlier in the morning.

After the brutal attack, Halbert underwent multiple extensive surgeries to repair serious wounds to her head and neck. She additionally endured a range of “stress-related illnesses” as she healed from the murder attempt.

“I had been ripped inside out in every way possible: physically, spiritually, sexually, and emotionally,” Halbert said. “I didn’t know how I could ever recover from such violence and I cried for many, many months.”

When the case went to court, Ellen Halbert chose to testify against her attacker. At trial, prosecutors failed to charge the perpetrator with rape because she was “too sick to have a rape test” at the time of the assault, as she put it. However, the sexual assault was still brought up in court. Halbert’s assailant was found guilty of attempted murder and sentenced to life in prison.

With the court case behind her, Halbert’s road to recovery was still just beginning. As she continued to navigate the traumatic aftermath of her survival, her marriage ended and she lost her job. Eventually, Halbert connected with other crime victims and sought therapy as part of her recovery.

“I actually wanted to come out of it stronger than I was before,” she said. “It took me a long time.”

Over the years, Ellen Halbert began speaking publicly about the attack, and people listened. In 1991, Texas Gov. Ann Richards appointed Halbert to the Texas Board of Criminal Justice for a six-year term. Halbert was the first (open) victim of violent crime to serve on the board. While serving, she taught herself about the justice system in Texas and potential treatments for rehabilitating sex offenders. 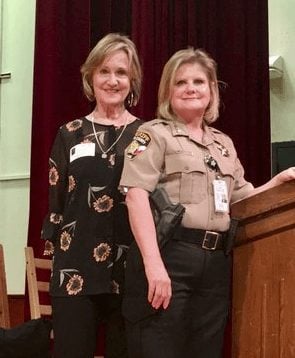 Ellen Halbert poses with Travis County Sheriff Sally Hernandez after speaking with students about restorative justice in May 2017. (Source)

After her term at the Texas Board of Criminal Justice ended, Halbert became heavily involved with restorative justice for victims of violent crime in Texas. Restorative justice can take many forms, but it typically involves conversations between victims and perpetrators that are facilitated by a trained mediator.

For the last 20 years or so, Halbert has worked with a program called Bridges to Life. She and other survivors of violent crime visit with inmates across Texas and share their stories. They focus on the “victim impact,” that is, how a perpetrator’s actions have harmed not only victims, but their family, friends, and larger community.

That being said, restorative justice is not for everyone who has experienced violent crime, as Ellen Halbert has said herself in past interviews. Every survivor’s recovery is different, and while some may benefit from a victim-offender dialogue, others may not. Furthermore, offenders must be willing to admit guilt for their crimes, something that many never truly reckon with.

Halbert has never spoken with her assailant as part of a restorative justice process – he has denied guilt for his attack.