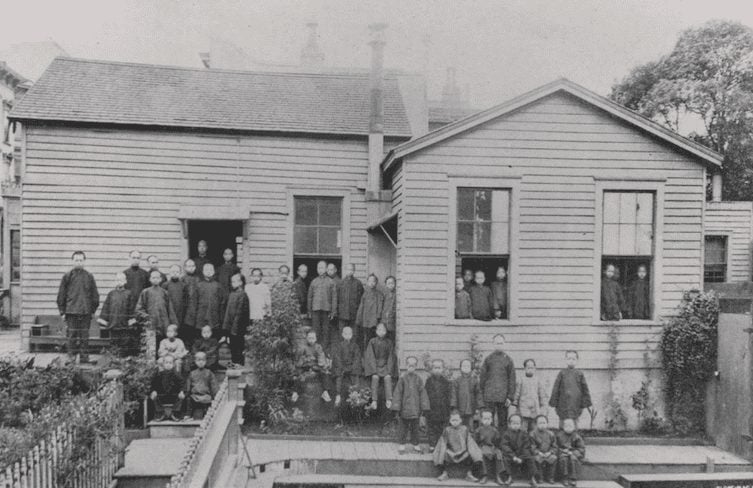 The Chinese Primary School on 916 Clay Street in San Francisco in 1906. (Source)

The history of anti-Asian laws and riots in California, and its relation to AAPI hate during COVID-19 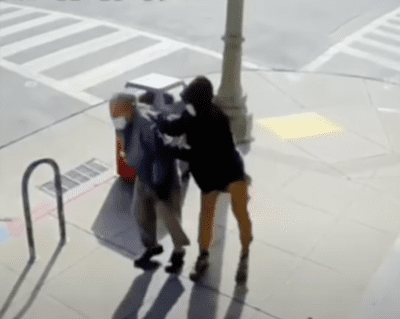 An elderly Asian-American man is violently pushed over while walking on the sidewalk at a busy intersection in 2021. (Source)

Stop AAPI Hate, a San Francisco-based organization that tracks hate crimes and other forms of discrimination against Asian Americans throughout the country, reported more than 9,000 incidents from March 2020 to June 2021. Videos of anti-AAPI physical attacks against elederly Asian Americans have swept social media since COVID-19 took hold. Images of people being shoved, punched, and kicked as they walk in public spaces are sadly all-too-common as the pandemic (and many Americans’ reaction to it) rages on.

California in particular has been host to many of these violent incidents. In response to the explosion of racist attacks against Asian-Americans in the state. Gov. Gavin Newsom approved $1.4 million for the Asian American Studies Center at UCLA as well as Stop AAPI Hate in February 2021.

Newsom’s move to support these groups is genuinely significant because political leaders typically respond to an increase in violence by simply expanding police budgets, like New York has. But throwing more money at police does not solve racial violence.

In light of an increase in anti-AAPI attacks in the state, I wanted to look at California’s history of anti-Asian legislation as well as large-scale race riots that have taken place in the last 150 years or so.

Foreign Miners Tax of 1850: In response to the influx of Chinese mine workers coming to California, the state enforced a foreign miners tax that forced Chinese miners to pay a monthly $20 fee not required for white miners.

People V. Hall in 1854: After a Chinese man witnessed a white man commit murder, the California Supreme Court ruled his testimoniy inadmissiable because it found that Chinese people were “a race of people whom nature has marked as inferior. This ruling legally classified Chinese people with the same limitations as Native Americans and Black people, and meant they could not testify against white people in court.

The Chinese School was established in 1859: In 1859, San Francisco began segregating Chinese school children from their white counterparts in schools, making it illegal for a Chinese child to attend a public school. The city founded The Chinese School, and it was the only place these kids could receive an education. In 1870, San Francisco cut funding to the school and shut it down, forcing Chinese parents to hire private tutors because no schools were available to their children in the city.

Chinese Police Tax Law of 1862: The California Legislature passed a law in 1862 that imposed a monthly tax on all Chinese and “Mongolian” working adults in the state. The actual text of the Chinese Police Tax Law reads, “ An act to protect free white labor against competition with Chinese Coolie labor, and to discourage the immigration of the Chinese into the state of California.”

Chinese Massacre of 1871: After a white man was shot to death by a Chinese man in Los Angeles, a mob of 500 white and Latino men attacked the city’s Chinatown. They lynched 19 Chinese men and destroyed parts of Chinatown. It’s believed that nearly every Chinese resident in the city was attacked. Eight men were convicted of manslaughter in the mass killings, but were soon set free on technicalities.

San Francisco Riot of 1877: Over the course of three nights, white workers in San Francisco attacked the Chinese immigrant population in the city, killing four people and causing more than $100,000 of damage to Chinese-owned businesses and homes in Chinatown. There were no arrests made in the racist killings.

Chico Chinese Massacre of 1877: In Chico, CA, white men shot and killed four Chinese men and attempted to burn down the town’s Chinatown, but were unsuccessful. There is no evidence of any arrests made in the killings.

California Constitution of 1879: The constitution of California is ratified with an entire Article dedicated to discriminate and vilify Chinese immigrants. The constitution made it illegal for any business to employ a person of Chinese descent, and says expliciting that “the Legislature shall discourage their immigration by all the means within its power.”

San Francisco’s Chinese Primary School in 1885: After the city’s segregated school for Chinese children, The Chinese School, stopped receiving municipal funding and shut down in 1870, San Francisco established a new school in 1885. All children of Asian descent were forced to attend this school or have no education altogether.

Truckee Expulsion of Chinese in 1886: After White residents had unsuccessfully attempted to remove Chinese people from the town in previous years, they became more violent in expelling them. Truckee residents began boycotting any business that sold goods to Chinese people, and most businesses quickly shunned the Chinese. Most immigrants left town, but some remained. White Truckee residents burned the Chinatown and destroyed it entirely, killing three people.

The Geary Act of 1892: California Rep. Thomas Geary proposed a federal law that required all Chinese people in the U.S. to carry a resident permit. Those who failed to carry their papers when stopped by authorities faced deportation or one year of hard labor. This federal law followed California’s lead in making it illegal for Chinese residents to bear witness in court or receive bail. The provisions of this law were held up by the Supreme Court the following year. It remained law of the land until 1943.

Redlands Expulsion of Chinese in 1893: In September 1893, hundreds of white men began attacking camps of Chinese workers in Redlands, CA. Violence escalated when rioters burned down homes, beat and robbed Chinese families, and looted businesses. For the Chinese who remained in town, white residents utilized the newly passed Geary Act to file hundreds of false claims against these residents, alleging they didn’t have their papers. The Chinese were forced to flee the town. To this day, Oriental Avenue in Redlands continues to mark the old border of the Chinese neighborhood.

San Francisco Attempts to Segregate Japanese Schoolchildren in 1906: As local white residents became more infuriated with the influx of Japanese immigrants into San Francisco, the city’s school board of education ordered that Japanese children could only attend the Chinese School (now renamed to the “Oriental Public School”). However, Japan’s government called on President Theodore Roosevelt to exclude Japanese children from the anti-Asian provision, citing a 1894 treaty that protected Japanese immigration to the U.S. The resulting policy is known as the Gentlemen’s Agreement of 1907, which overturned segregation of Japanese schoolchildren, and allowed them to attend public school in the U.S. An anti-Chinese political cartoon from 1912. (Source)

Live Oak Expulsion of Asian Indians in 1908: A couple dozen white residents in Live Oak, CA attacked two buildings housing Indian immigrants in January 1908. They beat and robbed the Indian workers, mostly Sikhs, who were working for the Southern Pacific Company, and forcibly removed them from town.

Roldan v. Los Angeles County in 1933: This court case dealt directly with California’s anti-miscegenation laws, which are laws prohibiting interracial marriage. Salvador Roldan was a Filipino American man engaged to a white woman, but their marriage license was rejected by a Los Angeles County clerk. The couple petitioned, and the case eventually went all the way to the California Supreme Court. When the high court declined to hear the case, the couple effectively won and could be legally married in the state. However, within one week of the decision, the California Legislature passed a law to bar those of Filipino descent from marrying white people.  It was signed into law. Nine days after Roldan won the case, Gov. James Rolph signed the bill into law, ending the legal recognition of that marriage.

California Internment Camp, Manzanar, established in 1942:  After the attack on Pearl Harbor, President Franklin D. Roosevelt authorized the creation of American concentration camps to hold Japanese-Americans. The Manzanar War Relocation Center was established in 1942 and incarcerated more than 10,000 men, women, and children of Japanese descent for three years. It was the country’s first Japanese internment camp. California ordered that any person with at least 1/16 Japanese be forced into concentration camps like Manzanar. Nearly ⅔ of those held at Manzanar were American citizens. A total of 10 camps were built throughout the U.S. and held a total of 120,000 Japanese Americans until World War II ended in 1945.

Chinese Confession Program in 1956: As McCarthyism and the Red Scare took hold of American public life, Chinese Americans faced growing scrutiny for alleged Communist ties. In 1956, the San Francisco Chinese Consolidated Benevolent Association began working with the U.S. government to get Chinese immigrants to confess past crimes with the promise of a path to citizenship. Officials with the Chinese Confession Program denied citizenship to anyone with left-leaning beliefs and primarily used the program to deport anyone of Chinese descent at their personal discretion.

Though this list ends in the 1950s, it is not to say that anti-Asian legislation and mob attacks came to an abrupt halt in California. They did not. But progress marches forward, and the national fervor against Asian Americans slowly turned into fervour against other immigration groups, such as Mexicans and Arabs.

Fighting racial discrimination and hate is an ongoing battle, and the COVID-19 pandemic resurfaced much of that hate against Asian Americans in California and throughout the U.S. But with groups like Stop AAPI Hate and the efforts of some local leaders to address systemic racism against Asians Americans, perhaps progress can continue to trend in the right direction.

More stories: Police Killings of Latinos in Los Angeles Since 2016